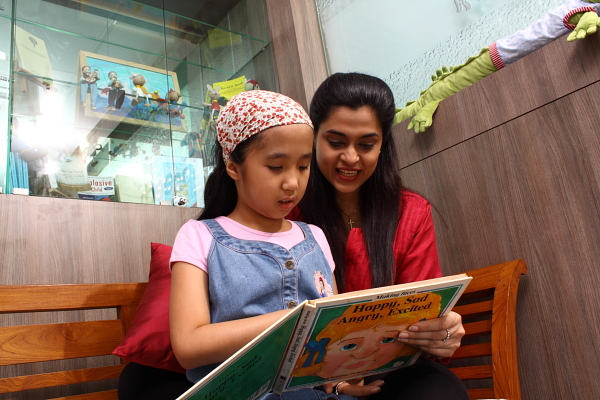 Operating from Ampang for first 17 years, CareSpeech expanded to Megan Avenue II, Jalan Yap Kwan Seng (5 minutes walk from KLCC) in 2010.  The move was necessitated by the need to cater to the increasing number of children requiring our services. The move to a larger premise also allowed for the latest facilities and the extension of services that greatly benefited our clients on our caseloads.

Care Speech & Language Therapy Centre excels in giving optimum quality services and in particular, we pride ourselves in our ability in sustaining quality control. This is achieved though constant monitoring of our employees by the Centre's Director and Founder, Ms. Jennifer Peters-Lee. Consultants, Speech Therapists, Therapists and Remedial Teachers in our employ continually update their knowledge by attending in-house training, as well as, appropriate workshops and talks as and when these are available (both locally, and where possible, abroad).

The Speech Therapists, Therapists and Remedial Teachers employed by the Centre are required to fulfil the standards set forth by the Centre's Director and to adhere to stringent protocols; including maintaining daily progress updates of clients  and providing reports to clients at the end of each treatment package. In addition, weekly team meetings chaired by the Director are held for case reviews.

All assessments, comprehensive reports and treatment programmes will be specifically designed, conducted by, or performed, in collaboration with the Centre's Director.

Born in Kuala Lumpur, Malaysia, Jennifer Peters - Lee has been a Pediatric Speech & Language Pathologist since 1992. The only child of a planter, she underwent a change of schools that encompassed the length and breadth of the country. The transfers from state to state (dictated by the nature of her father's job) endured her to the multiplicity of Malaysia's rich language and diverse cultural heritage, resulting in her being a fluent bilingual speaker, with an understanding of two other languages.

This early introduction to the complexities of languages prevalent in Malaysia was to be the basis of her first book, Making Chatter Matter: Understanding Language Impairment within a Multilingual Environment, officially launched in December 2006. The book, though written for a niche market, has been successful in attracting readers interested in a deeper understanding of language in multilingual societies. The book is now in it's third printing. The Bahasa Malaysia version of the book was officially launched in July 2007.

On completion of her secondary education in Malaysia, she obtained her B.A. (Hons) in Linguistics and Language Pathology from the University of Reading, United Kingdom, and her Certificate to Practice from the Royal College of Speech-Language Therapists, London, United Kingdom. She obtained her Post-Graduate Diploma in Language and Communication Impairment in Children from the University of Sheffield, United Kingdom, and has successfully completed several postgraduate assessment courses offered by ASHA (American Speech Hearing Association) and from Speech Pathology Australia.

In 1992, she embarked on her career at a private peadiratric rehabilitation centre in Kuala Lumpur, where she worked with a spectrum of physically and mentally challenged children. A year and a half later, she opened her own centre, where she is still pursuing her passion for teaching language-impaired children to communicate.

She is a Chartered Member of MASH (Malaysian Association of Speech-Language Hearing), and served on the Executive Board for the initial six years of the Association's existence. She was  the Chairman of Education and Training for the Society for the Severely Mentally Handicapped, Selangor and Federal Territory for several years. She is a member of the Malaysian Autism Advisory Panel (MMAC).

She contributes articles to local English language dailies ,as well as, local based magazines on various aspects of Speech and Language Pathology, with the aim of increasing public awareness. She has held workshops, given innumerable talks and continues to be invited to give lectures for numerous institutions, schools and NGOs. She  continues to undertake pro-bono work for charities.

Currently, she is an Academic Adviser for the Speech Sciences Programme, in the Health Sciences Faculty, Univeristy Kebangsaan Malaysia.

While in Australia, Lalitha began her career as a Applied Behaviour Analyst (ABA)Therapist. Subsequently, she joined the Australian Hearing Hub Macquarie as a Research Assistant.

Lalitha's lovely manner  enables her to establish a good rapport with her clients who ages range from young children to young adults. She strives to give of her best to all the children she supports clinically.

Joanne joined CareSpeech in January 2019 as Academic Support. Her understanding of Sociolinguistics helps towards improving children's learning strategies,  speech and behavioural skills  and in developing and adapting conventional teaching methods to meet the individual needs of clients.

Arcina Ravichandran joined Carespeech in March 2020. Born in Kuala Lumpur, into a family of five, Arcina graduated with a Bachelors of Counselling and Guidance (Hons) from the Management and Science University (MSU).

Fluent in English, Bahasa Malaysia and Tamil, Arcina adapts her lessons in creative ways to highlight the learning strengths of the child she is working with,.

Hailing from Bidor, Perak, second in a family of five, Kamala Devi Genesam, completed her Secondary schooling in 2006. In 2012, she graduated with a certificate of 'Civil Engineering & Interior Design' from Institute Kemahiran Tinggi Belia Negara Dusun Tua (IKBN).

In 2020, Kamala joined Care Speech as Office Administrator and her duties encompass all aspects of the smooth daily running of the Centre. Her warm personality and willingness to expand her knowledgebase endures her to all.

Thank YOU for visiting our website!
‍‍
We, at CareSpeech look forward to working with you to help support your child! Contact us to book a FREE 30 minute consultation or to enquire about our specialized services.

Book a free 30 minute consultationEmail me
Thank you! Your submission has been received!
Oops! Something went wrong while submitting the form.